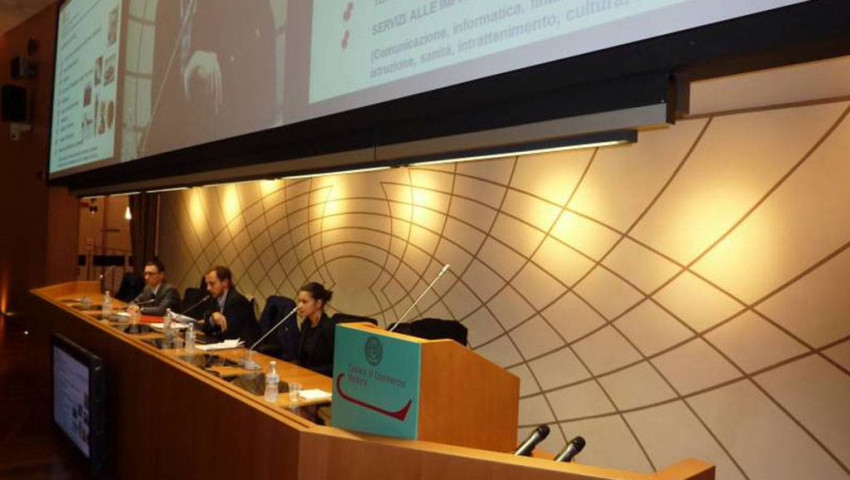 It took place on October 28 at the hall of via Leonelli in Ganaceto, seat of the Chamber of Commerce of Modena, a meeting called "Orientamedie", between parents of children in middle school and institutions that constitute a point of reference for the economy of our territory, in order to create a bridge between schools and area and help parents and children in the choice of a training program in line with the needs of the labor market.

On invitation of the Chamber of Commerce and as part of the activities promoted by the Club of Corporate Social Responsibility, Dr. Mirio Brozzi for DUNA-Corradini took part in the meeting with a speech focused to illustrate our vision of the economic future and the work reality in the coming years.

The confrontation was opened by Dr. Boemi of the Province, with an interesting discussion on the characteristics and the approach to the labor market in the province of Modena, who has examined the employment sectors, the trends and the most common types of contracts to depending on the size of the enterprise.

Later, the Director of Education, Professor Menabue, spoke of the training of technical and vocational schools, with particular emphasis on the most recent legislative changes and organizational public school, as well as on the topic of early school leaving.

While referring of course to the present time, which probably will not be the same these kids will find at the end of high school, both proposed analysis on the current situation of the labor market and the school have been very accurate.

DUNA-Corradini, and the textile company of Carpi Staff Jersey, had the task of explaining the most sought profiles and skills at this time by two types of companies deliberately very different.

The very high participation by parents that we found, on one side talks about how these issues are felt, showing an interest in our country and a culture that are always respectable. On the other, however, this participation is also strongly symptomatic of the unease that the parents live about the future of their children in this particular historical moment, due to the social and economic difficulties that our community is going through.

This type of events, which represent an effort to harmonize school and business realities, highlights the difficulty these two entities sometimes have in relating to each other in the correct way, especially in a continuously and fast changing society like the one in which we live in, but on the other are just evidence of a an incessant commitment and continuous research in this direction, to which we are pleased to have contributed.

The intervention of Mirio Brozzi stressed the epochal changes that characterize our historical moment and as a result the world of work; changes that we all must face and which are, on  one hand, a source of frustration, uncertainty, worry, but by on the other hand may represent enormous opportunities for new jobs.

Falled in fact the boundaries of language and culture, in the world today and in our everyday reality we are witnessing a cultural leveling which is not and must not be seen only as a risk (except for those who cannot adapt).

Today more than ever, knowledge and an open mind are absolutely necessary: to move in order to understand and live different realities, exposing themselves to new features are certainly rewarding in a world that is constantly changing and at an exponential rate.

On the other hand we believe that there will be return “to do and to develop”, because society is cyclical, and we would like to emphasize the importance of technical disciplines, engineering faculties where possible, and in general culture, which remains very important beyond the professional aspect.

We can only do our best wishes and give our "good luck" to all the guys who are operating the difficult choice of skills and areas in which to engage their future.